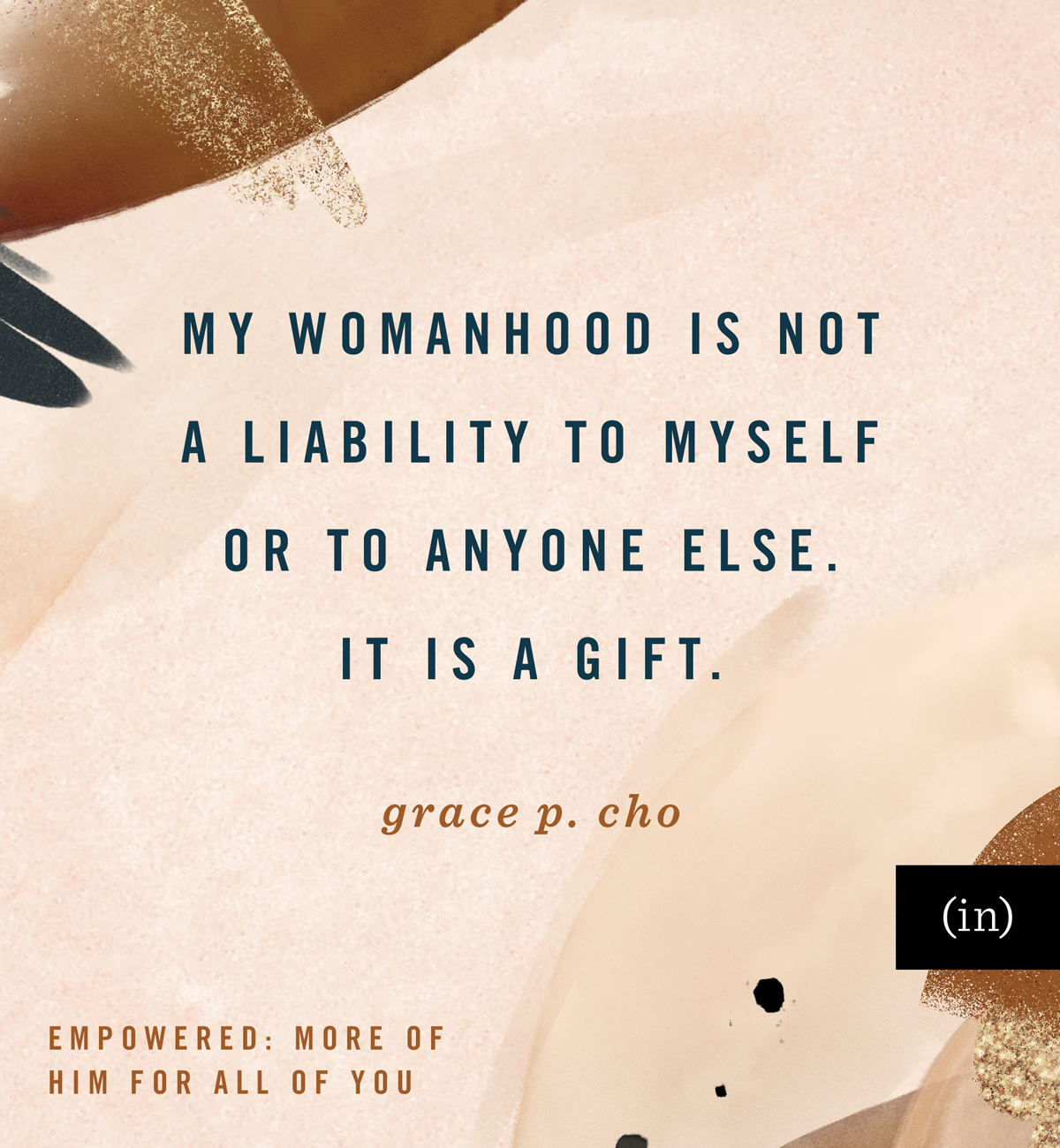 Our father died in the wilderness. He was not among Korah’s followers, who banded together against the Lord, but he died for his own sin and left no sons. Why should our father’s name disappear from his clan because he had no son? Give us property among our father’s relatives.
Numbers 27:3–4

“It’s hard to be seen, let alone respected, as a woman in the workplace— especially as an Asian American woman. Unless I’m wearing a blazer and high heels, the assumption is that I should be the one getting coffee for the group instead of the one leading the meeting.”

The rest of us at the table—women of various ethnic backgrounds and across the career spectrum—nod our heads in agreement and lament that this has too often been our experience as well. Unless we appear taller, older, more domineering, or even more masculine, we’re not taken seriously or seen as professional.

Another woman shares how she’s held back tears in ministry meetings because she knew her opinion would be discounted. She would’ve been deemed “too emotional,” and therefore her empathy and heart for justice would’ve been overlooked. I can see the anguish and anger in her face when she talks about how powerless and diminished she felt in those situations and how she longed to be valued without repressing her emotions.

I’m stunned by the commonality of our pain. I had thought I was the only one who was seen as “the cute Asian girl” instead of the professional grown woman that I am, and I’m relieved that I’m not alone in feeling overlooked and undervalued.

At five foot one, with a round face, eager smile, and chipper attitude, I feel as though I’m playing dress-up when I take the stage at a conference or sit in leadership meetings where I’m the only woman in the room. I’ve learned along the way that heels and a blazer do make a difference in the way I’m treated and that tears indicate weakness, not strength.

Furthermore, and sadly, I’ve seen women in Christian spaces who are looked down on for the way they dress if they’re highlighting their best physical features or who are laughed at for their intelligence or their courage to fight against misogyny.

I despise that I’ve needed to and chosen to suppress who I am to some extent in order to fit into the likeness of what others—and especially men—have said about who and how I should be.

My womanhood is not a liability to myself or to anyone else. It is a gift.

I hear this message most clearly from those outside of faith circles, but in the quietest parts of my soul, I know it’s true in God’s eyes too. Though the stories of the Bible are set within patriarchal cultures, there are glimpses of God’s heart for women throughout the arc of Scripture. The daughters of Zelophehad are given their father’s inheritance in the promised land right alongside his other male relatives (Num. 27:1–11). Jesus is born of Mary (Luke 1:26–38), and Tamar, Rahab, Ruth, and Bathsheba are all included in His genealogy. Mary Magdalene is the first messenger to bring news of the resurrection (John 20:11–18).

I see myself particularly in the story of Zelophehad’s five daughters. Mahlah, Noah, Hoglah, Milkah, and Tirzah have the audacity and the strength of sisterhood to confront Moses, Eleazar the priest, and all the leaders of Israel to demand that they be recognized as legitimate heirs of their father’s land. They challenge the cultural expectations, history, and laws of their people, which do not favor women. Moses brings their case before the Lord, and God responds, “What Zelophehad’s daughters are saying is right. You must certainly give them property as an inheritance among their father’s relatives and give their father’s inheritance to them” (Num. 27:7).

Mahlah, Noah, Hoglah, Milkah, and Tirzah knew their value, and they made it known to everyone else. They set a precedent for women to be audacious and valued, and in God’s approval of their request, I see His approval of my worth as well.

Father, You see me fully. When You breathed life into me, You breathed pricelessness into me. When it seems that my womanhood is a liability for others, help me to remember that You made me a woman on purpose and that You value me as such. Make me audacious and bold like the daughters of Zelophehad, like Jesus Himself. Amen.

This article was written by Grace P. Cho, as published in Empowered: More of Him for All of You.

Today on the podcast — a bonus episode! Listen in as Grace reads her chapter titled Mending a Marriage That Was Falling Apart, from our newest book, Come Sit With Me. Listen at the player below, or wherever you stream podcasts.

My womanhood is not a liability to myself or to anyone else. It is a gift. -@gracepcho: