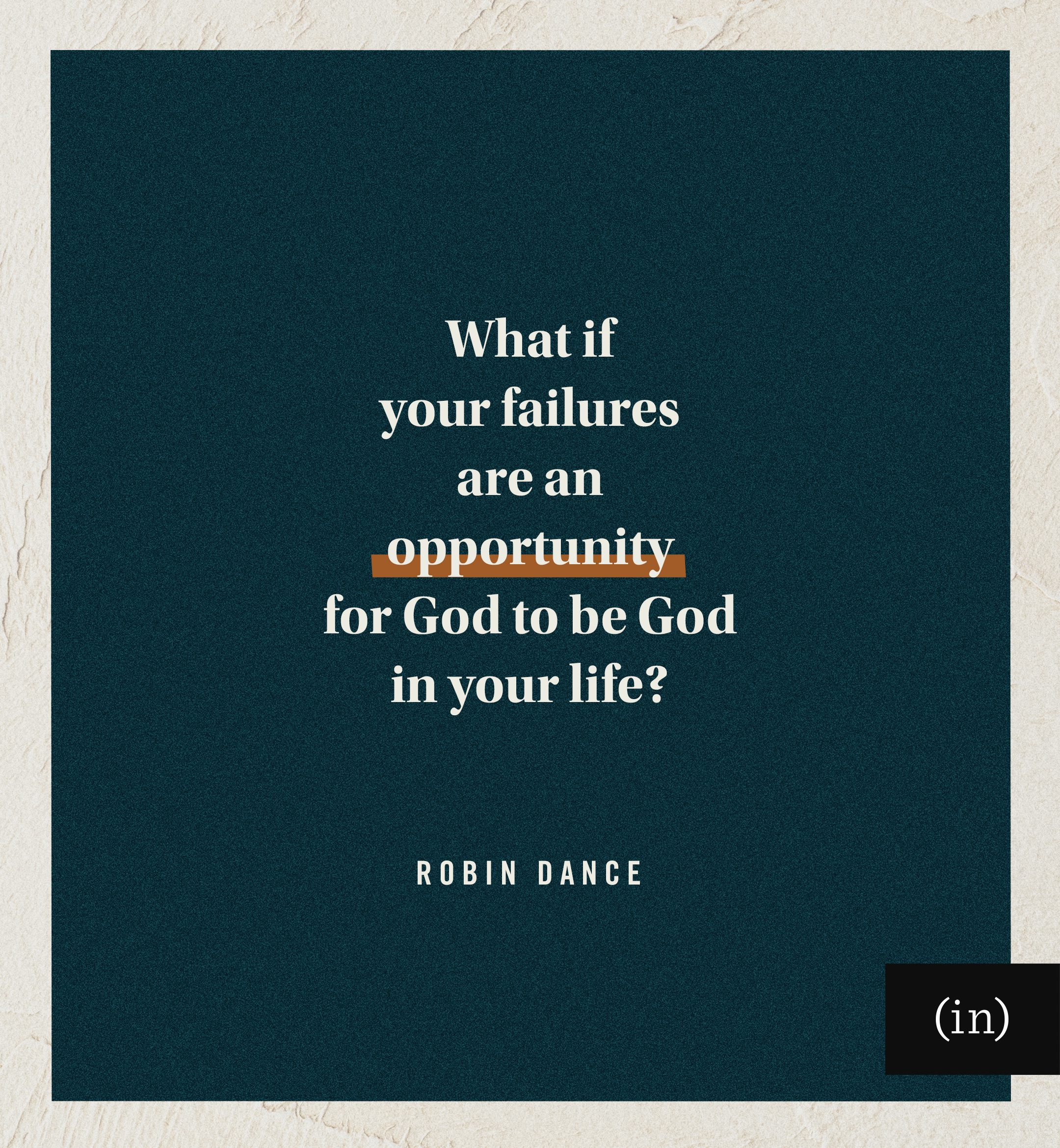 I’m going to go out on a limb here and assume most of us have failed at something. And I’m convinced how we see, internalize, and respond to our defeats and disappointments makes all the difference in the world.

Is your tendency to dwell on your mistake and self-flagellate over your lack of success? Do you get disproportionately angry, default to a victim mentality (Why does this always happen to meeeee?), or assign blame elsewhere? Do you dig in your heels determined to make it work at all costs (when it’s past time to let go), or are you paralyzed altogether? Do you consider yourself defined by your failure — that you are a failure — in contrast to have simply failed at something? Do you just give up? Or do you see your failures as an opportunity to learn something, shift direction, or try a new thing? Do you see how they might point you to Jesus?

What if your failures are an opportunity for God to be God in your life? For you to grow closer to Him, to be conformed to the image of Christ? For your failures to be received as a catalyst for transformation?

Our response to failure says something about our maturity level, both in general but also spiritually. This goes for big, spectacular failures, but also for the more common, everyday, ordinary sort of thing.

Anyone who steps into my kitchen knows it’s my happy place. There, I’m in my element, and I’m confident in my abilities (namely, the ability to follow a recipe). It’s not that I think I’m the next Food Network star, but I’ve had some wonderful teachers and a lot of years of practice. The creative expression nourishes my soul while simultaneously feeding the bodies around my table. Cooking for others brings me joy.

Somewhere along the way, I became a scratch cook snob, at least when it came to baking. It wasn’t so much that I judged others who cooked treats from a box; I just developed a lot of pride about my pies and cakes and fancy-pants desserts. A lot of pride . . .

Had I considered what the Bible says about pride, I might have aspired to be a more humble baker:

One’s pride will bring him low, but he who is lowly in spirit will obtain honor (Proverbs 29:23).

When pride comes, then comes disgrace, but with the humble is wisdom (Proverbs 11:2).

And especially, Pride goes before destruction, and a haughty spirit before a fall (Proverbs 16:18).

Instead, in His infinite wisdom and by His long-suffering grace, God found another way to deal with this subtle sin of pride in my life.

As part of a church supper club, I had signed up to bring dessert that month. I was so sure of my baking abilities, I selected a new recipe: a Kentucky Derby Pie. I was genuinely excited because chocolate + pecans + a group of people I loved, so I wanted to make something special. (Oh, it would be special, all right . . . )

The morning I made my pie was the start of a busy day, full of demands and distractions vying for attention (including my three young children). When the pie came out of the oven, it looked and smelled delicious. I couldn’t wait to slice and serve it to our supper club. They are going to be so impressed, I imagined.

Everyone brought their A-game for the course they provided that night. Our host grilled a beef tenderloin to perfection, and my pie was to be the perfect finale to our delicious meal.

Friends cleared the table and cleaned dishes while Ronda made coffee and Greg handed me a server to slice the pie. I leveled it to make the first cut but couldn’t penetrate the surface. Confused, I tried pressing harder and began sawing back and forth. Still, I couldn’t make a dent.

Concerned but optimistic, Greg handed me a serrated knife. I tried to “hammer” the point of the knife into it, just to get a cut started, and instead bent the knife. Not willing to concede without a fight, Greg poured hot coffee over the entire pie to soften it. Nothing.

That dessert was little more than concrete masquerading as a pie. I was mortified. Poor Ronda scavenged her kitchen looking for anything that could pass as dessert. Everyone was more than gracious, and they were kind enough to laugh with me and not at me.

I never figured out for sure where I had gone so wrong, but the next month I brought broccoli casserole.

Later though, it occurred to me how there’s value in our failures. They’ll often become seared into our memory, but more importantly, they can also point us to something we need, the perfection we crave: Jesus.

My mistakes and failed efforts don’t mean that I am a mistake or that I am a failure, but they do remind me of my need for Christ. Jesus is already what I will never be — perfect. He has already accomplished what is impossible for me despite my best efforts. Through His life, death, and resurrection, He loved me without condition, forgave me, paid the penalty of my sin, and reconciled me to God.

My failures may reveal my inadequacies, but they also become opportunities for me to see that God is my everything.

I love that God used a pie fail to transform my perspective of failure, but He always seems to find just the right way to teach me something about Himself.

What have you learned about God through your failures?

My mistakes and failed efforts don't mean that I am a mistake or that I am a failure, but they do remind me of my need for Christ. -@robindance: 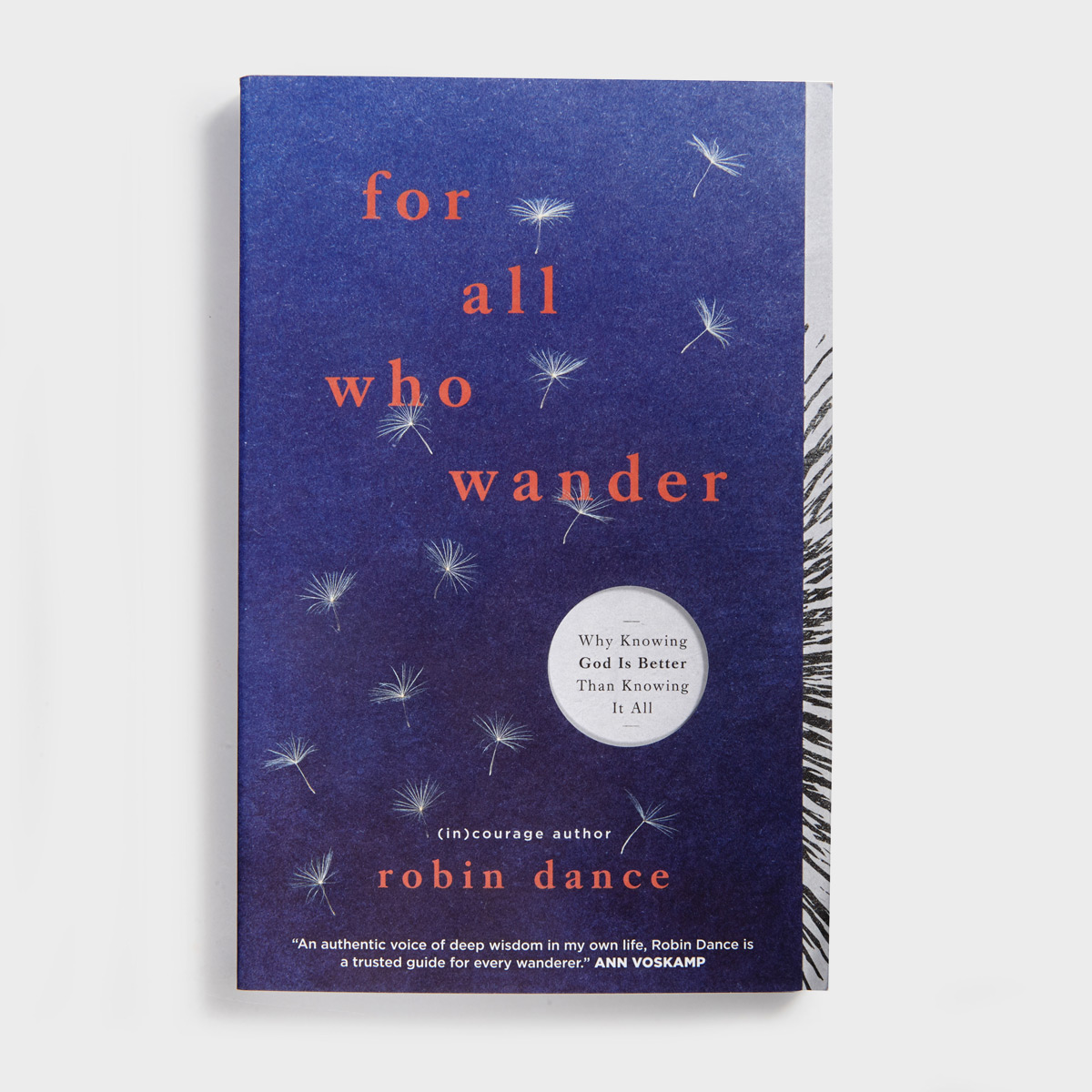 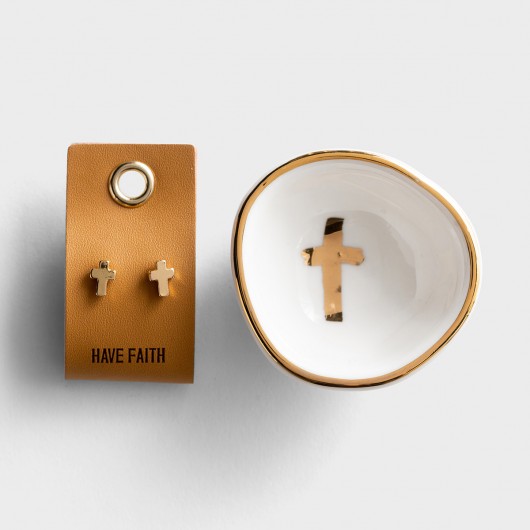