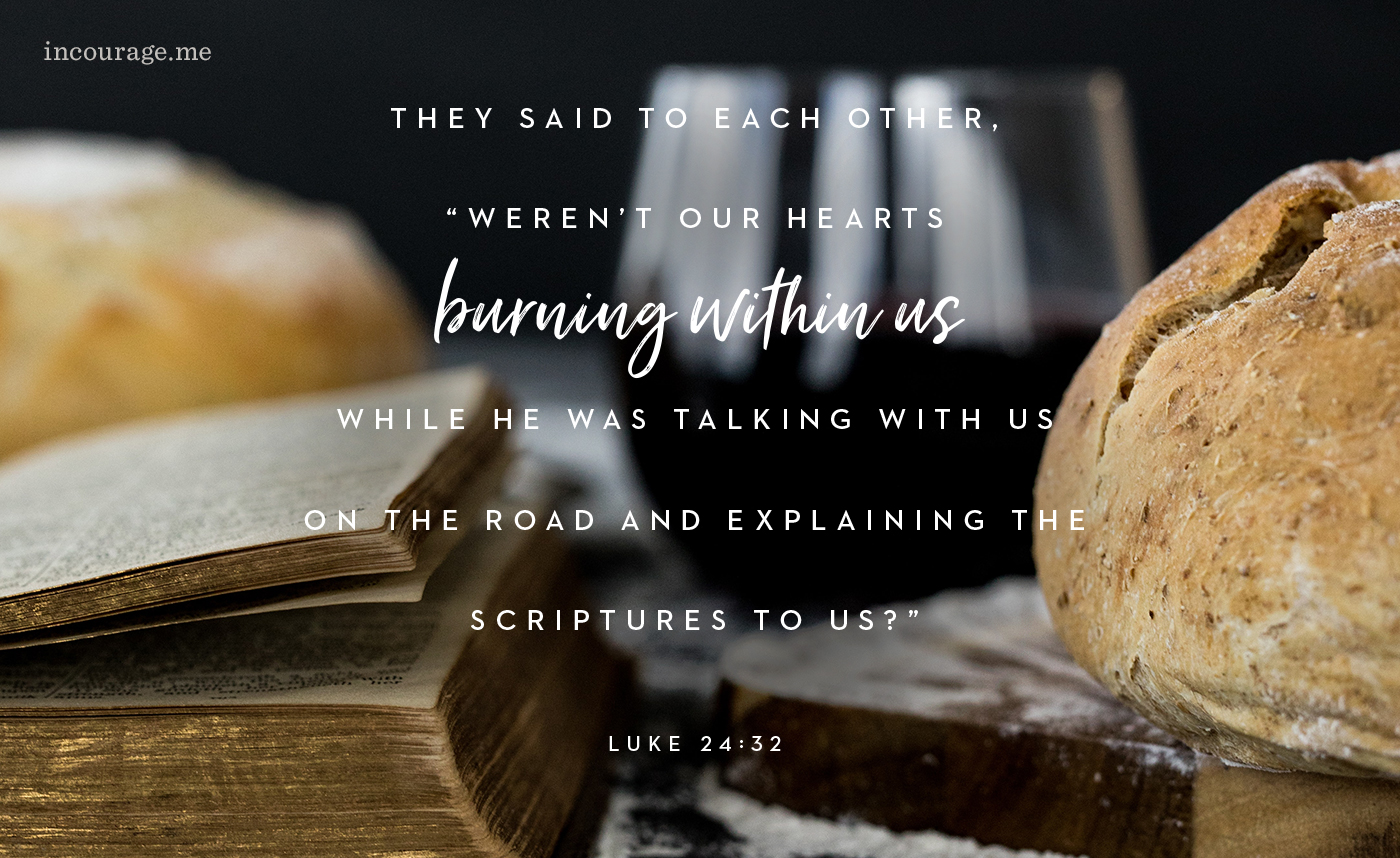 Today’s passage is a bit longer, but we invite you to take your time reading it. Imagine yourself in this story, walking with Jesus in the midst of confusion, grief, and hopelessness.

Now that same day two of them were on their way to a village called Emmaus, which was about seven miles from Jerusalem. Together they were discussing everything that had taken place. And while they were discussing and arguing, Jesus himself came near and began to walk along with them. But they were prevented from recognizing him. Then he asked them, “What is this dispute that you’re having with each other as you are walking?” And they stopped walking and looked discouraged.

The one named Cleopas answered him, “Are you the only visitor in Jerusalem who doesn’t know the things that happened there in these days?”

“What things?” he asked them.

So they said to him, “The things concerning Jesus of Nazareth, who was a prophet powerful in action and speech before God and all the people, and how our chief priests and leaders handed him over to be sentenced to death, and they crucified him. But we were hoping that he was the one who was about to redeem Israel. Besides all this, it’s the third day since these things happened. Moreover, some women from our group astounded us. They arrived early at the tomb, and when they didn’t find his body, they came and reported that they had seen a vision of angels who said he was alive. Some of those who were with us went to the tomb and found it just as the women had said, but they didn’t see him.”

He said to them, “How foolish you are, and how slow to believe all that the prophets have spoken! Wasn’t it necessary for the Messiah to suffer these things and enter into his glory?” Then beginning with Moses and all the Prophets, he interpreted for them the things concerning himself in all the Scriptures.

They came near the village where they were going, and he gave the impression that he was going farther. But they urged him, “Stay with us, because it’s almost evening, and now the day is almost over.” So he went in to stay with them.

It was as he reclined at the table with them that he took the bread, blessed and broke it, and gave it to them. Then their eyes were opened, and they recognized him, but he disappeared from their sight. They said to each other, “Weren’t our hearts burning within us while he was talking with us on the road and explaining the Scriptures to us?” That very hour they got up and returned to Jerusalem. They found the Eleven and those with them gathered together, who said, “The Lord has truly been raised and has appeared to Simon!” Then they began to describe what had happened on the road and how he was made known to them in the breaking of the bread.
Luke 24:13-35 (CSB)

The two disciples were walking in the suspended days between Jesus’ death and resurrection. After following Him all those years, they must’ve felt abandoned and empty, lost and bewildered. As they argued, were they hashing out with one another was and wasn’t true? And in the midst of their arguing and grieving, Jesus shows up and walks with them. He explains the truth about Himself again and shares a meal with them, as He probably had done many times before, and in the breaking of bread, they realize who He is.

We seem to be living in suspended days as well. Every day, we try to figure out what we’re supposed to do, and it’s confusing. We seem to be sheep without a shepherd as we navigate this pandemic, but God will show up here and now. We are not without our Leader, our Shepherd, our God. Through a meal or someone’s kindness, through overwhelming generosity or someone’s gentle answer, through His Word and through Zoom prayer meetings, we can see Him still.

Lord, teach us again Your truth during this time. Show up as You did then for the disciples on the road to Emmaus and burn within our hearts the hope of Your resurrection. Amen.

Through a meal or someone's kindness, through overwhelming generosity or someone's gentle answer, through His Word and through Zoom prayer meetings, we can see Him still. Click To Tweet Leave a Comment