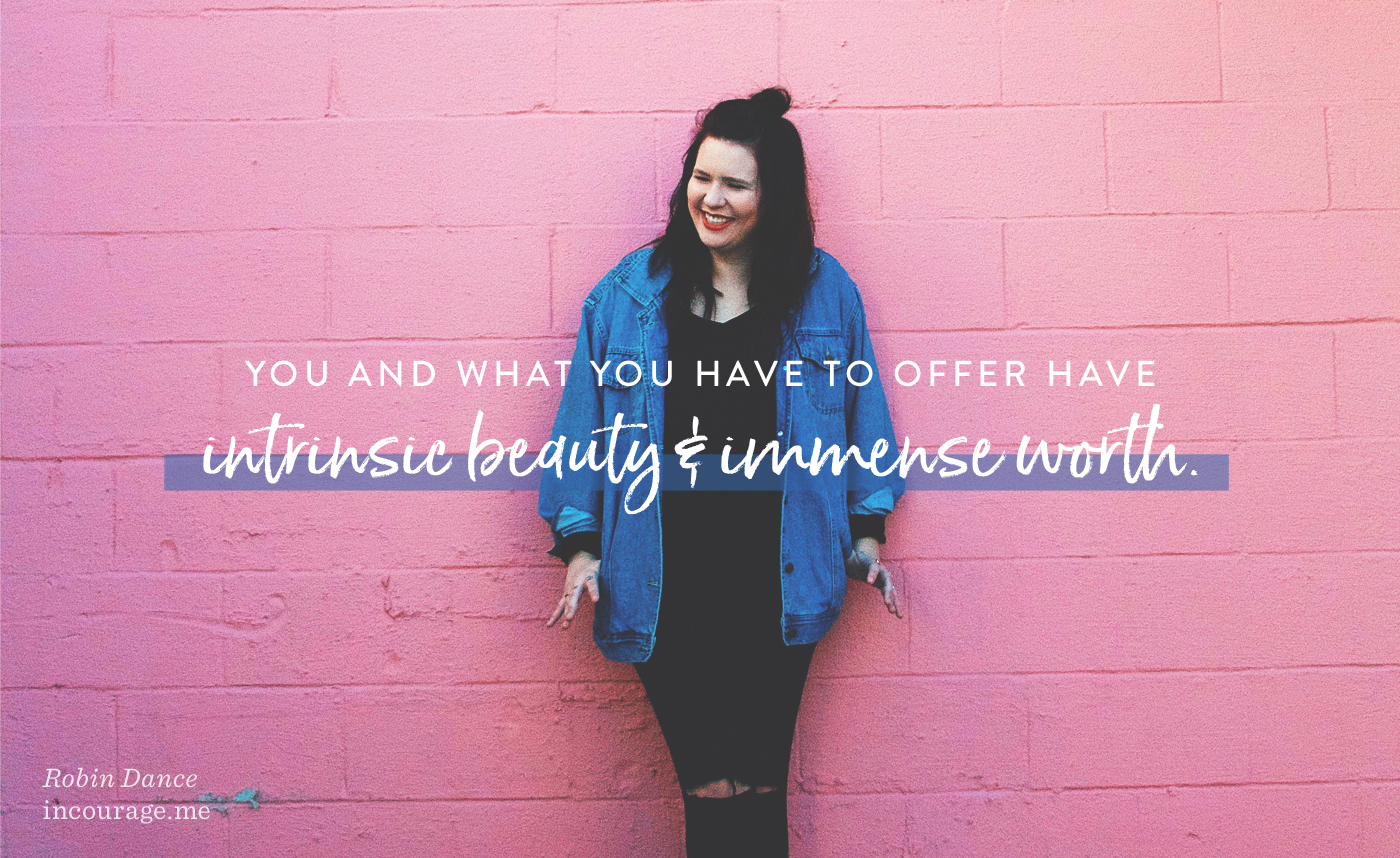 When I read her words, they felt like hot embers. They burned glory — only glory — but fueled by old insecurities, my humanity received them as a personal assault. The enemy hissed lies, and I lapped them up like a ravenous kitten, allowing them to seep into tender places and to pick at old scars.

You aren’t as good as her.
You can’t write as well as she can.
Why do you even bother?

Waves of inferiority crashed over me, unsteady feet slipping into darkness. Defeat happens in a heartbeat in unguarded moments whenever I allow myself to forget Whose I am.

That’s how the enemy of our heart works: he mingles truth with lies and wagers we’ll believe the latter at the expense of the former. How? There’s just enough truth to lend credibility to the lie. Or at least, this is his modus operandi for me. It’s effective, isn’t it?

You might not be a writer, but I bet there are ways your spirit receives a similar assault –

We torture ourselves with unfair comparisons, but they don’t tell the complete story.

When we do this we’re only comparing one aspect of another’s life to the whole of ours. You’ve probably heard the quote by pastor Steven Furtick: “We compare our behind-the-scenes with everyone else’s highlight reel.“ We’ve all done it, but that doesn’t make it any less logical.

Suppose I did write like her or you can fill in the blank with your own comparison — what would be the benefit in that? Imagine attending a symphony where the orchestra, loaded with accomplished musicians, played only a singular note. That one note might be beautiful, but it would be awfully boring, and what a waste of talent! Similarly, what if when God made the rainbow, He made only bands of red? Sure, it would be beautiful – how could an arc of color streaking across the sky not be? But, oh, how we’d miss orange’s flame, yellow’s smile, green’s signs of new life, blue’s strength, indigo’s charm, and violet’s majesty!

God created us unique for a reason: His glory. Our differences and diversity reveal God’s complexity and imagination and the special ways He intends for us to reflect His goodness and grace and glory to a world in need.

“Consent to inferiority” is a particular vulnerability to women, or at least I think we admit it more often. Images for the perfect woman/wife/mother/writer/whatever are everywhere we turn. Yet, you and what you have to offer – your “Little Drummer Boy” drummings – have intrinsic beauty and immense worth. But if you withhold what only you have to offer, you’re withholding it from the Body of Christ.

For as in one body we have many members, and the members do not all have the same function, so we, though many, are one body in Christ, and individually members one of another. Having gifts that differ according to the grace given to us, let us use them.
Romans 12:4-6 (ESV)

Comparing ourselves to others is not only defeating, it’s damaging to us spiritually because we’re focusing on the wrong thing — ourselves instead of God. To embrace who we are in light of who God is and to offer our unique selves in an expression of gratitude reorient our focus back to God.

The wave of inferiority from reading my friend’s beautiful, lyrical prose crashed over me but quickly subsided as I realigned my thinking. What I knew to be true reminded me that her words, talents, and gifts were no assault or indictment of my inabilities. When I was freed from comparison, I was able to learn from and be inspired by her. And then a funny thought occurred to me: if I wrote just like her, her writing wouldn’t be nearly as appealing but instead ordinary and familiar.

The Body of Christ and our world need us to live our respective stories as each one of us is uniquely designed to fulfill.

The Body of Christ and our world need us to live our respective stories as each one of us is uniquely designed to fulfill. -@robindance: Click To Tweet Leave a Comment