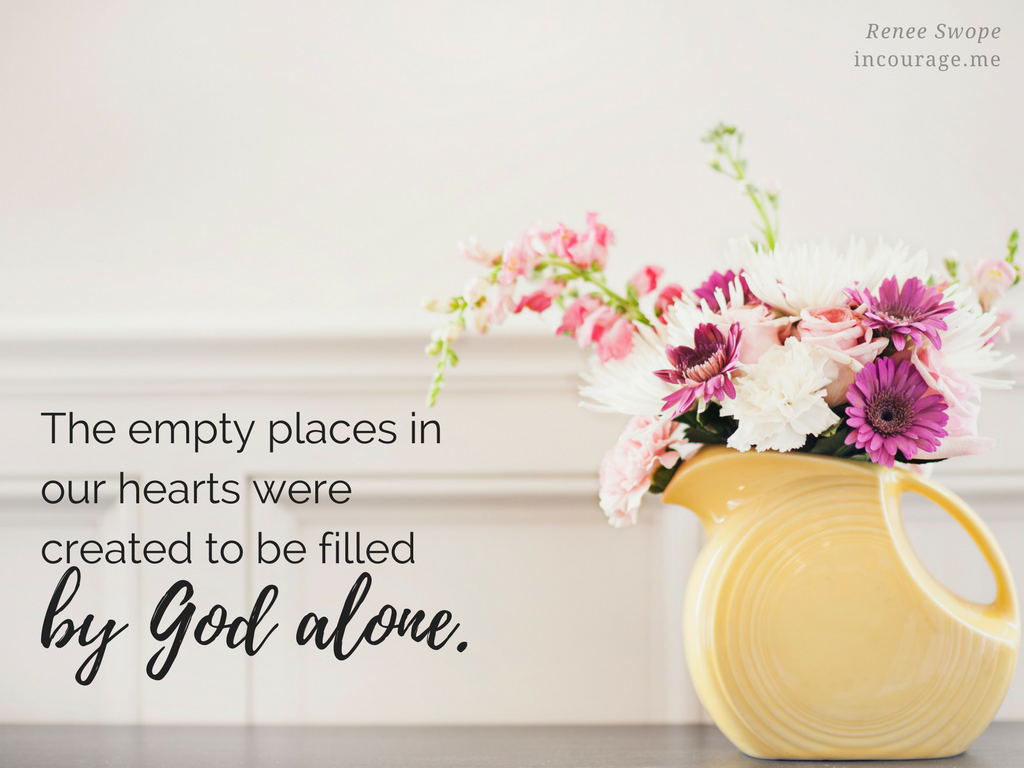 It was a source she’d come to depend on. A place she went to get her needs met, but it was never enough. Every day she came back for more.

Filling her jar with water, the woman looked up and heard the man asking her for a drink. Then He offered her something in return: living water. Unlike the water she came to get that day, He said this water would be so satisfying that she would never thirst again.

Questioning His offer, she said:

You have nothing to draw with and the well is deep. Where can you get this living water? (John 4:11)

But she didn’t know who He was, and that all He needed to draw with was His Spirit, for it would draw her near to Him.

As far as the depth of the well, it was her heart He was looking into. And she was the only one who could stop Him from reaching the empty places that needed Him most.

Like the woman at the well, I’ve depended on other means to get my needs met. Yet when I look to them, instead of Him, they are never enough.

I’ve looked to family and friends, bosses and boyfriends, teachers and mentors, my husband and kids. I’ve longed for their approval and the affirmation that comes with it.

I’ve looked to possessions and positions, and put my hope in recognition, thinking: “If only I had…. If only I could…”

We see this deep thirst even in King David, who had everything: the highest position, unlimited possessions, and great power, yet none of it was enough. In Psalm 63:1, he described himself as parched and thirsty for God:

You God, are my God, earnestly I seek you;
I thirst for you, my whole being longs for you,
in a dry and parched land where there is no water.

Then David went on to describe what he experienced when he drank deeply of God’s love:

Because your love is better than life, my lips will glorify you. (Psalm 63:3)

The same thing happened to the woman Jesus met at the well that day. She drank deeply of His love and was filled to overflow.

The empty places in our hearts were created to be filled by God alone. The deepest thirst of our soul can only be quenched by Him.

Just like the woman at the well, God put a longing in our hearts intended to lead us back to Him. Only His unconditional acceptance, approval and affirmation can fill our empty places.

Until God’s love and acceptance is enough, nothing else will be.

YOUR TURN: As you look back on recent struggles, could it be possible there are places in your heart Jesus wants to fill with His love and acceptance, places where you might have been looking to someone or something other than Him?

The empty places in our hearts were created to be filled by God alone. // @reneeswope at @incourage: