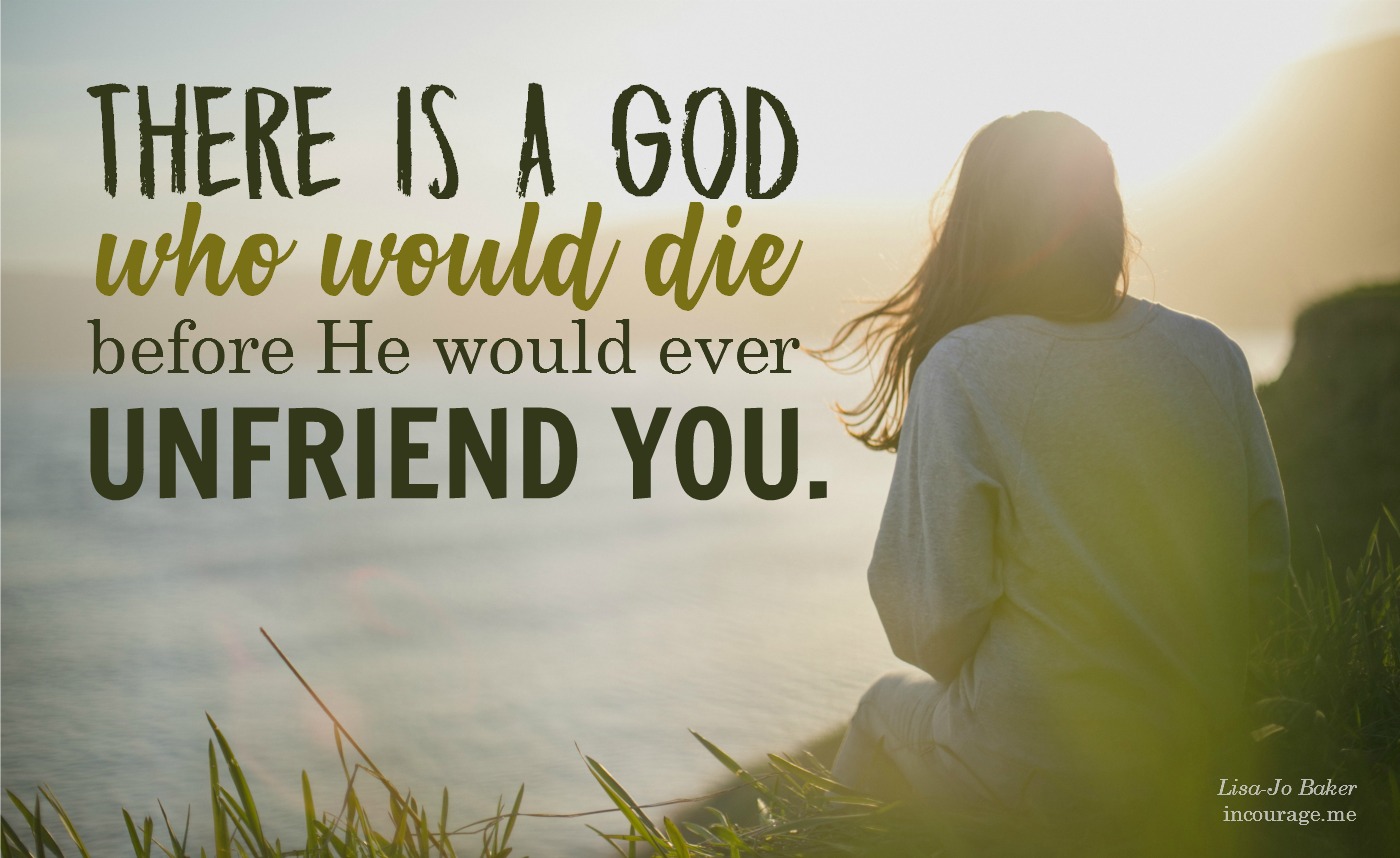 So what do you do when the book that cost you 18 months of your life and many many tears comes out into the world? You go to Panera for breakfast and coffee and then maybe you are too distracted to do any real work so you start people watching.

When two little kids next to you EXPLODE into whoops and hollers of “Grandma!! GRANDMA!!” when their grandma walks into the front door and when they THROW themselves on her with the uncensored love of toddlers you start to cry.

So I’m sitting here over my bowl of oatmeal kinda weepy and praying awkwardly for the people around me and for you.

For every one of you whose eyes scroll through these words. Because at the heart of the heart of this book called Never Unfriended is this guarantee —

There is a God who would die before He would ever unfriend you.

There is a God who did die rather than unfriend you.

No one has greater love than this, that someone would lay down his life for his friends. (John 15:13)

Jesus didn’t leave, unlike, or unfriend a single one of his 12 closest friends. He’s not about to start with you. Not even when they deserved it. Not even when they swore they’d never met Him, didn’t know Him, despised what He stood for. Instead, He kept on keeping the promise He first made through Moses in Genesis, that He would never leave or forsake His people (Deuteronomy 31:6).

In His final prayer, His heartfelt conversation with His Father God on the night before He would die, Jesus testified to His own faithfulness as a friend,

While I was with them, I kept them in your name, which you have given me. I have guarded them, and not one of them has been lost except the son of destruction, that the Scripture might be fulfilled. (John 17:12)

Jesus could tell His Father in no uncertain terms, that as far as it was possible for Him, He had kept the faith and the friendship of every one of the men entrusted to Him. Even Judas had been included right up until the moment He chose to quit Jesus, not the other way around.

This is the God who moved into the neighborhood to come and be your friend. To get to know you. To understand your quirks and watch your kids grow up and look over your shoulder as you try that new recipe or squint at new gray hairs in the mirror.

This is the God who allowed Himself to be constantly interrupted, inconvenienced, and disregarded. This is the God who embraced the act of kneeling, of dirty feet, of smelly company, of listening and never ever, ever being too busy.

This is the God who has pursued you since before time across galaxies and DNA and broken families and past hurts and who never, never, never considers you a waste of time.

This is the God who is not shocked by your failures, your doubts, or your choices.

This is the God who does not keep a record of your wrongs.

This is the God who isn’t keeping score, keeping tabs, keeping you down.

This is a God who made time stand still on a broken hill on Calvary so that He could reach through the past into your future and grab you by the heart and the hand and the soul and rescue you.

You are loved harder and longer and more urgently than the ending of any Jane Austen novel.

Beloved, all you have to do is say yes. And let Him love you and wrap you in His righteousness and He will take away your sin and your failings and your fear and give you His own life — life to the full.

There is a God who believes that you are worth dying for.

Do you believe that?

If you’ve never met Jesus before we’d love to introduce you to Him.

He is the most faithful friend. And He would die before He would ever unfriend you.

If you’re just meeting Him for the first time or getting re-acquainted with Him after a long while, we’d love to pray with you. Just leave a comment below or keep reading over here to learn more about what it means to be friends with Jesus.

We pray this book might be a small reminder of the massive love your God has for you.

He is the only one who can live up to the promise to Never Unfriend you. It’s worth taking Him up on it.

Our God? He'd die before He would ever unfriend you. // @lisajobaker at @incourage: