Being in debt is a lot like being in the dark. You grope around, reaching and praying for a way out. You can’t quite seem to find anything stable to grab onto and steady your feet. You don’t know if anyone else is out there struggling in the ways you are . . .

not knowing if you have enough money to make it to the end of the month.
consumed with guilt from financial mistakes of the past.
fearful someone else will find out.

You feel hopeless and alone and stuck . . . in the dark.

I struggled for years, knowing we were in way over our heads. I sat in the silence of empty church pews, begging for a word of hope. I wished away our mess, all $127K of it. I felt defeated, realizing I should have better managed our money. We weren’t stupid people. How in the world did we end up in this place?

We should have known better. Shame and guilt like to play in the dark. They tackle our souls and leave us lifeless on the ground, exhausted with an inability to move on.

Certainly the darkness fears the light. How quickly the darkness flees from the presence of light! Light strips darkness of its power. Bringing our embarrassing failings into the light is an incredibly vulnerable and potentially painful act, and yet it was the way we found peace and a way out.

Our decision to dive into the journey of paying off our debt was perhaps the second craziest thing we’ve ever done. Dragging our darkness out into the light and sharing it online through my blog was hands down the craziest. It amped the fear to a whole new level.

What would people think? Would they be disappointed? Shocked? Would they laugh? Take delight in our poor choices?

Surprisingly, if there was judgment or dismay, I never caught wind of it. Instead, I quickly began to hear the voices of others who disclosed a common fight. With their whispers of “me too,” we gained strength in our battle against debt. The light brought with it an amazing community who cheered when we succeeded, encouraged when we faltered, and perhaps gained something from our story too.

Our souls, flooded with the light of Jesus, realized there was true Hope and a way to true Freedom. We were far from alone. Gradually, we were becoming unstuck. The Light revealed we had wasted much time looking inward when we could have been spurring others forward toward Freedom. They had also been deceived by the dark into thinking they were alone.

Four years later we stood on the other side of the darkness. The debt – all $127,482.30 of it – was gone. We marveled in the feat (that we believed would take us well over a decade) being accomplished in such rapid time. It turns out God is much better at math than we ever were. Simple obedience over time yielded a great reward.

The darkness once convinced me that the journey to freedom would be bleak and joyless. The darkness is a liar. Our days, while marked by sacrifice, were far from miserable. The Light had unearthed simple pleasures and the meaningful stuff of life that the darkness cloaks with jealousy, envy, and deceit.

I would be a fool to convince myself that the darkness no longer has any power over me. Daily, I still pray to be delivered from debt – from my own desires to buy more, have more, or live beyond my means.

Have you found yourself in a place of darkness? Perhaps depression fills your days or your heart deeply grieves a lost child. The divorce, the diagnosis, the deep division in your family – darkness takes on all sorts of forms. No matter how the darkness has slowly crept into your soul, friends, there is always Hope. And that hope multiplies when you expose the darkness to the Light. 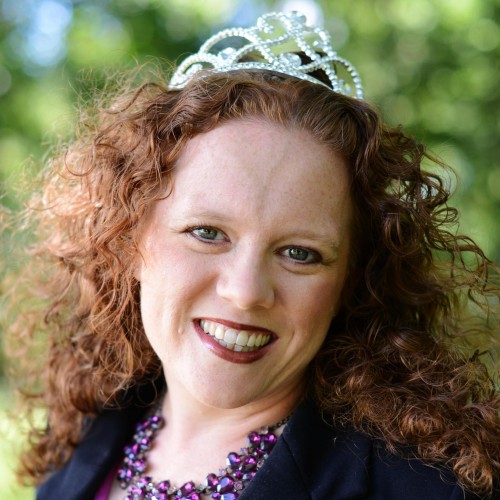 Author of Slaying the Debt Dragon (Tyndale, Jan. 2015), Cherie is addicted to spreading Hope to the hopeless and reveling in simple things.