I have a pest control problem.  It’s not in the form of rodents or roaches, squirrels or silverfish.  No, it’s a bigger problem–a much bigger one–in the form of the red-headed 7 year old that lives next door–Sam.

When we first moved in, I found his frequent visits charming.  I thought the nose prints that adorned my sidelights were endearing evidence of a little boy in search of signs of life within our house.

I chuckled as another neighbor told me of seeing Sam outside our door at 7 a.m. on a Saturday morning peering in intently.  I was amused that he watched for our familiar SUV to round the corner and my children to start spilling out of it before making a mad dash across the front lawn to greet us.

But, then, something changed.  And I was annoyed.

I felt like his family took advantage of my generosity and hospitality.  I had my own children, my own set of problems and issues, and it wasn’t fair.  I fumed. And, although I never voiced my complaints out loud to him, I’m sure the little guy sensed the shift in my spirit.  I was justified, I reasoned.

After all, Sam would just open my pantry and help himself to snacks.  How rude.  He would whisper requests to my children and have them intercede for him and beg for him to accompany us on outings or stay for dinner or get another snack.  He balked at my rules around naptime and homework time and having no food in the living room.  I overheard him tell my children that I was ‘mean.’

And then, one December day, I heard a knock at the door and there, laid at my feet, was a ‘present’ of sorts. It was a gallon-sized Ziploc bag filled with a Diet Coke, a Coke Zero, a sugar-free chocolate pudding cup, an electronic SpongeBob SquarePants toothbrush, and a party favor from the dime section of Party City.  On the outside, written with an ink pen in first-grade scrawl, it said, ‘to Abby, Daniel, and Jackson. From Sam.’

It humbled me.  And it broke my heart.

Over the next few days, I thought about the contrast between the humble shepherds and the magnificent wise men. I thought about presents beautifully packaged with sparkly bows, of gifts of gold, frankincense, and myrrh, and about dirty, worn-out shepherds with tired sheep draped around their necks–shepherds whose only ‘present’ was their awe of a newborn King.

The truth is, I am much more like a shepherd than a wise man, and my offerings to my Savior are much like Sam’s.  They are humble, a hodgepodge, used, and come without batteries. But, it is all I have to lay at His feet.  And He tells me that He loves me and that it is enough.

I heard Ann Graham Lotz say once that every Christmas she asks Jesus what present she can give Him for His birthday.

She says the answer He whispers into her heart is always one that involves sacrifice.

As for me, I will be loving on the little red-head next door and praying for the supernatural love with which to do it.  It is but a humble offering to the One who already has everything.  It is my Ziploc bag, laid at His feet. 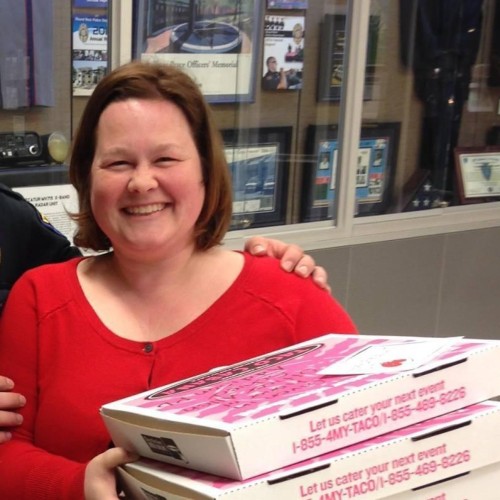 Kristen, wife & mom of 4, lives deep in the heart of Texas. Each day, she starts many tasks but finishes few, thankful for a God who, unlike her, is faithful to complete.