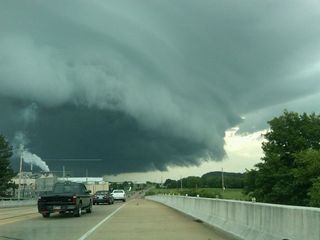 On a single day, everything can change.

The residents of Joplin, Mo. will remember that day as Sunday before last, when a 3/4 mile-wide tornado bullied and bloodied its way along a six-mile trek, killing 139, leaving hundreds homeless, and in some way affecting every one of the 49,000 people who call it home.

For over a million people, that day fell only a few weeks earlier, when supercell thunderstorms bred a string of tornadoes that terrorized the Eastern third of the United States leaving a trail of tears miles wide and heart deep.  Whole towns were leveled, 370 people were killed; in unimaginably sad circumstances, entire families. The injury count is in the thousands, the economic impact, billions, the personal toll, incalculable. The majority of deaths occurred in Alabama, Tennessee and Mississippi, but Georgia, Arkansas, Virginia and Louisiana saw tragic loss of life as well.

Perfect Storms, cruel displays of nature’s fury, the kind that history remembers in categories of “worst” and “most deadly,” and that give survivors reason to mark time in terms of “before” and “after,” and everyone knows what they mean.

But God wasn’t caught off guard.

And in ways we’ll likely never understand this side of the Kingdom, He can use these tragic circumstances for our collective good, His glory and the advance of the Gospel.

But people are still hurting and it’s natural to question “Why?”  Anger is understandable.  “How could God allow this to happen,” has been whispered in thought, and for some, out loud.

The truth is I haven’t met anyone who can satisfactorily answer these questions, but this I believe even when murky doubt-clouds threaten:

God is good, only good, and His delight is in the redemption of the broken.

Stunning Ancient Words give us a glimpse–

Yet what we suffer now is nothing compared to the glory he will reveal to us later….

And we know that God causes everything to work together for the good of those who love God and are called according to his purpose for them.

Can anything ever separate us from Christ’s love? Does it mean he no longer loves us if we have trouble or calamity…?

Sweet, incomprehensible mercies are extended to us through this inseparable love of God for His children, despite circumstance. Thank you, Jesus!

I live in one of the areas affected by the April storms; a month later I still marvel at the legion of 3-story tall fallen oaks and the homes and businesses smashed to splinters.  Though our home remained unscathed, neighbors didn’t fare so well.

I had no idea until later the magnitude of these deadly storms–dear friends who live on a small farm would sustain major property damage to barns, but as they huddled and prayed in their basement–their home just feet away would be almost untouched.  The husband, soon, would discover bodies of his neighbors nearby as he sought to help others.

As the storms pounded the Southeast, Facebook friends and Twitter followers with electricity or working cell phones checked in with one another; sometimes, before, to warn, and other times, after, to offer help and make sure you were alright.  Like others, we opened our home via a Facebook update to whomever, to shower or do laundry or have a meal or stay with us; we had few takers but that wasn’t the point.  In its own way, it was sharing the Gospel, giving what we had for the benefit of someone else.

John Piper’s assertion “God is most glorified in us when we are most satisfied in Him,” has come to mind over recent weeks as I’ve watched my Chattanooga and Southern neighbors start the rebuilding process.  I’ve heard people who lost everything material praise God that their lives were spared; I’ve heard accounts from those who lost family members praise God because they believed some how this was part of His plan and in some way He was at work in their midst.

I’ve seen God beautifully glorified in these people because of their satisfaction in Him alone.  What an amazing testimony to their faith!

I’ve watched the Church Universal spring to life as individual faith bodies joined hands to minister the Gospel through food and shelter and service; people loving people in action, not just words. And maybe one of the most lovely aspects has been to watch those outside the faith rise up and serve, too, with those distinctions not mattering a bit.  And they got to hear and see the Gospel at work, right alongside those being served.

If you have been personally affected by these days where everything changed, do you know your (in)courage community has been praying for YOU?

We care about and ache for the losses of our sisters, and if you’re willing to share, we want to hear how we can specifically pray for you now. We understand that once this story is off front page news, you’re still hurting.  You still have need.  We barely remember previous disasters now–Katrina…Haiti…Japan–but in the days surrounding them, nations rallied and support poured in; until nations moved on and support waned. Not because people didn’t care, but simply because the sense of urgency passed…and all was forgotten when front page news diverted our attention.

To our (in)courage community, will you help us remember those affected most recently by the Midwest and Southern tornadoes?

Our community is thousands strong and we know your support will make a difference in the lives of many:

By Robin Dance, author of PENSIEVE, who still likes to walk in the rain.