Fifteen years ago a friend paid me a compliment I’ve not only remembered but cherished ever since:

“You’re consistent regardless of where you are, who you’re with or what you’re doing.”

The occasion was a women’s Bible study, and though I recall little about the lesson that day, each of us had drawn names and were charged with sharing a positive word of encouragement about her with the group.

Years have come and gone and I’ve received hundreds or encouraging words since, but that one is tattooed on my heart, punctuated with smiley faces and butterflies.

A few weeks ago, my son and two of his friends walked to our neighborhood park to play tennis. An hour later the boys called asking me to bring towels because they were going to jump in the pool before coming home.  This puzzled me because the pool typically opens Memorial weekend* and I hadn’t heard otherwise.  They assured me it was open because a group of people were in the pool while they played tennis.

When I arrived, I passed a parked truck near the pool and courts.  On the right lies a large field, and there were two dads lighting fireworks to the squeals and laughter of a dozen half-pints–the dangerous sort of fireworks that take aim and chase you, thrilling the kids all the more and coaxing smile from my lips.

I noticed my boys weren’t in the pool, and as I pulled closer I rolled down the passenger window as they hurried to my car.

“A man told us to get out!”  “Yeah, said the pool wasn’t open, but we SAW other kids swimming!”  “He told us our skin would turn blue!” “He was mean!” tumbled an avalanche of word-frustration.

“And he’s parked over there watching us!”

Their eyes pointed in the direction of the parked truck I had just passed.

Defensive for them on the inside, but outwardly beginning a lecture to explain why the adult was “right” in asking them to leave before the pool was chemically ready and officially open,I jumped out of my skin when I realized there was a man standing outside my window!

I rolled it down and he very nicely explained to me how he had asked the boys to get out of the pool because workers had just begun treating the water. He was a dad with the group of fireworks/birthday children, and he couldn’t have been friendlier. His words trailed as he turned back towards his group, “I hope the boys didn’t think I was mean to ask them to get out….” I couldn’t imagine based on his congeniality. 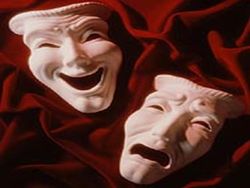 My window was barely rolled up when Stephen’s friend flatly said, “He was nice to you but he wasn’t to us.” I slowly absorbed what he said…and what he hadn’t yet expressed. “I hate it when grown-ups are nice to each other but not to kids,” chimed another. I listened as they continued to explain, and I knew they were right. They felt the sting of adult-to-child accusation and undeserved judgment. All he saw was three barely-teenage boys breaking rules; intimidation and fear would take care of that.

Good and typically compliant boys, they would have gotten out of the pool if he had said, “Hey guys, the pool isn’t opened for a few weeks…the chemicals are too strong to swim yet.”

The man was Jekyll and Hyde.

Critical and defensive for my boys, I judged him with a pointed finger of accusation.

But then I noticed three were pointing back at me….

I thought back to Mandy’s encouragement to me. How often have I made rash judgments with only partial information? When have I reacted to others or circumstances in a manner that betrays my faith? Do I always treat people with the respect they deserve as image bearers of God? Or do I respond based on appearance and perception?

I contemplated, of all the nice things people have said to me over the years, why Mandy’s compliment stands out. And it hit me–consistency is the character of God! I can take no credit if she observed that in me…it was Christ at work in and through me that she could see.

Which astonishes me, blesses me, and encourages me all over again.

Your turn: Have you considered “consistency” as Godly virtue? Is it something you consciously strive for or do you think I’m reaching here? What about you–is there a compliment from your past that haunts you in the present? Do share! I wanna get to know you a little better :).

* Keep in mind we submit (in)courage posts weeks to months before they’re published.