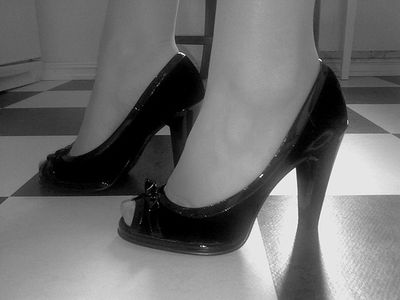 Ever since I was in the twelfth grade, I've known I was going to be a stay-at-home mom. At 18 when my French teacher asked what I was going to do with my life, I told him that all I wanted to do was get married and stay home with my babies.

To which he, after picking up his jaw in shock that a seemingly normal and intelligent young woman would even consider such a thing, answered, "what a waste of your brains."

When I got married and our Emma arrived a few years later, I knew I was made to be at home. When my maternity leave ended, I had to go back to work, but thankfully I could do so part time and around my husband's schedule. If one of us was at work, the other was at home. It just made sense for us.

Flash forward to a couple of years ago when I really wanted to go back to working outside of my home. I was tired of changing diapers, picking up toys, and not being able to go anywhere. But really, I was tired of not feeling important.

When I reentered the workforce, I loved the sense of purpose I had and how good it felt when I told someone what I did and they actually looked at me with respect.

It wasn't long, though, before I began to feel that tug in my heart I felt in high school, the one that was calling me to be at home once more. I began to pray (something I rarely did at the time) for God to provide a way for me to be at home, once and for all.

His answer came in the form of a promotion for my husband. With Kevin's new position, his ability to work from home and accomodate my work schedule all but disappeared. I quit my job (quite happily!) and dived into my rediscovered role as a stay-at-home-mom.

You'd think that would be the end – that God answered my prayer and we lived happily ever after. But what I discovered in the following year was that the tug I felt was really God getting my attention. I had some serious issues I had allowed to take control of my life. Because I was so wrapped up in finding myself in what I was doing, I couldn't deal with these other things.

One of those issues was my relationship with God. For three years I had basically just hung on. I didn't read my Bible. I rarely prayed. On the outside, I was an expert at playing the game, of looking like I had it all together. On the inside, I was literally falling apart. I asked God to help me many times, but I really had no idea how He could.

That summer after quitting my job, God opened my eyes and showed me that He had just stripped away every single excuse I had for not spending time with Him. When He exposed my heart like that, I knew it was time to lay aside all of it and just focus on Him.

In spending time daily with Him, He showed me what my true identity really was – His beloved daughter. And He answered that cry of my heart that so desperately wanted to know who I was and why I was here.

He helped to me to stop looking at myself, my life and the things He had called me to through the world's eyes, and to start looking at them through His — to see and appreciate them for the beautiful and unique blessings He made them to be.

I didn't know when I was praying about being able to be at home, that it was more about discovering these truths than about my own personal preferences. I didn't realize that beneath the surface of that prayer there were many, many layers that God was willing to address, if I would just be obedient to that tug He placed in my heart in the first place.

So many times I think we pray for things without really thinking about those layers. We become disappointed with God when He doesn't answer our requests in the way we think He should.

Perhaps what we don't realize is that it's not so much the situations that we are praying for that He is concerned about, but instead our hearts and our willingness to accept what He is doing in our lives.

"I don't think the way you think.

The way you work isn't the way I work.

For as the sky soars high above earth,

so the way I work surpasses the way you work,

Just as rain and snow descend from the skies

and don't go back until they've watered the earth,

Doing their work of making things grow and blossom,

producing seed for farmers and food for the hungry,

So will the words that come out of my mouth

not come back empty-handed.

They'll do the work I sent them to do,

they'll complete the assignment I gave them.

If you have something or someone you are praying for, know that God answers. And those words He speak don’t come back empty-handed.

They do exactly what it is He sent them out to do.

How can we pray for you today?