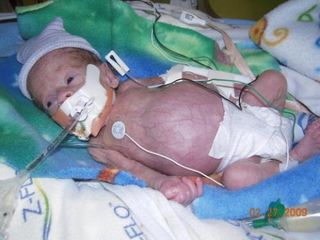 Tiny coffins should not exist. That’s all I could think as I stood in line to greet my friends, Brian and Amy—the small stone box behind them. Watching Brian and Amy greet the people who were in line before me was also moving. Sometimes they simply grabbed the folks who hugged them, holding tight for a long time without saying a word. Sometimes they laughed a little as they recalled a memory. Sometimes they choked up in the middle of a sentence.

Amy looked lovely and gracious as always. She’s a quiet woman, even a bit shy—but we all knew by now how strong she was. Eleven months before she had been admitted to the hospital due to preeclampsia. She was 23 weeks into her pregnancy, and both she and their twin unborn babies were being monitored. Two weeks later, she gave birth to Noah, who was 1 pound 3 ounces, and Claire, who was too small to survive.

Noah’s situation was precarious, but signs were good. I went in to meet little Noah when he was first born, and was stunned by how beautiful and delicate he was. I could see his little heart beating through his translucent skin and marveled that this tiny little body would eventually transform into a grown man. I didn’t even question whether he would survive. He was gaining weight, the hole in his heart had closed up, and most importantly, his older brother Kaleb who had been born prematurely was most certainly alive and active (and excited to get a candy from my purse every Sunday).

Every day for ten months, Brian and Amy made the long trip to the hospital to spend time with their son. Their entire community rallied around them; we prayed faithfully and we cheered as Noah continued to grow. Our hopes were high. The doctors were weaning him from his meds and reducing his oxygen supply. Brian was secretly hoping Noah would be able to come home by Christmas.

And then everything changed.

Brian called one night to say that things were not good. Noah was looking great, but internally he wasn’t doing so well. In fact, not good at all. The doctors had informed them that Noah had 0% chance of survival. A week later, he died. 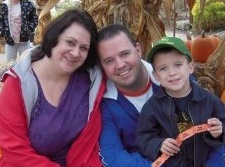 Brian and Amy have a quiet strength. The day of the viewing, their friend was not able to find a babysitter, but wanted to show support; she apologized for having her baby with her, and Brian quickly stopped her. “We are glad you have a baby to love!” After the funeral, Amy wrote on her facebook wall that she was praying for Becky, who had been Noah’s primary nurse—aware that Noah’s death was hard on others too. Brian and Amy quickly began noticing and celebrating the ways Noah had touched others in his short life. Brian went out of his way to encourage people to support the CaringBridge site so that others could benefit from the care it provides for hurting families. And they are turning to God with the pain in their hearts: “We have to admit,” Brian says, “that we are still not sure what God’s intentions were or why He chose us to take this journey, but we will continue to look to Him for those answers.”

Brian and Amy won’t have Noah, or Claire, home for Christmas. I’m sure they’ll still be mourning the loss of their precious twin babies, and asking God the tough questions. But I also believe they’ll have joy—not happiness from having everything they want around their Christmas tree, but joy from looking beyond their own needs and seeing others, from looking beyond their situation and seeing God.

Heather Gemmen Wilson loves to laugh. She says, "Through all the circumstances of my life, I have gained more than I have lost ... and I'm not just talking weight." Heather is married to her best friend, Lawrence W. Wilson, a pastor, and they have a colorful blended family of...