I am not typically a brave person. I’m just not. You are not going to catch me swimming with sharks or jumping out of planes. I grew up in Georgia, went to college in Georgia, and moved back to my hometown after college. I mean, I didn’t move back in with my parents, so I guess you can give me some courage points for that, right? There are a lot of words people use to describe me, but “brave” and “courageous” are not often used. At least, they didn’t used to be.

Then one day, I decided to move to Nashville, Tennessee. [That simplifies the experience in a major way, but let’s go with it.] Last August, at the leading of the Lord, I packed up my whole life and shoved it into my Toyota Camry. I said my goodbyes, pointed the car north and cried. For the entire three and a half hour drive. Not exactly bravery personified. I knew it was the right decision; it just came with a fair portion of fear and doubt. But I kept driving. No one from home believed I had done it. In all honestly, I couldn’t believe I had done it. Moved away. Left safety for the unknown. No friends, no family, no familiarity. Just me. And God.

And that just had to be enough.

I realized right then that having courage isn’t simply riding the tallest roller coaster or going to live in a hut in Africa (though both of those things, in my humble opinion, do require a large portion of bravery). Sometimes having courage is just taking that next step. Starting that hard conversation. Driving that next mile. Waking up and choosing to get out of bed even when you are in a new city and don’t have any friends. [Not that I know what that feels like or anything. Ahem.]

I thought that having courage was a one shot thing. “Phew. I moved to Nashville. I’m so brave.” Like once the roller coaster ends, so does your need to be brave enough to survive it. But what I’m growing to see is that God keeps giving me opportunities, over and over again, to show Him that I want to be brave. It’s like the rollercoaster never ends. Getting on it requires immense bravery, but staying on it, every hill and valley, requires just as much courage.

I’ve lived in Nashville for one year. And still, every time I load up and make that same drive north after a visit in Atlanta, I have to be brave. I choose to trust that God is going to take care of me. Trust that He knows better than I do. Trust that each mile I drive is somehow putting in me the strength to keep driving and the courage to keep living the life that has been given to me by God. 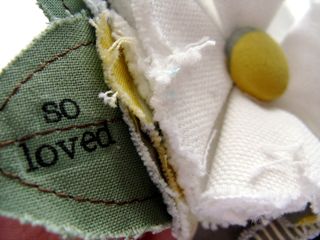 Find out why this little posy pin meant a whole lot to Annie by reading her post about it (and come see more Pleated Poppy posy pins here!).

Being Empowered by Jesus Changes Everything: https://t.co/Fb1sWxOwnH