A bright Sunday morning in south Georgia. The children’s choir stood on the carpeted platform in two fidgety rows, while their parents beamed. Anticipation hung in the air like dust motes.

When the piano introduction began, a fair-haired boy stepped forward to sing the opening solo for the call to worship.

After two faltering notes, he burst into tears.

A hush fell over the crowded sanctuary, as his mother and the choir director both hurried to his side. They gently took the microphone from his trembling hands, then escorted him to a quiet corner, out of sight from the congregation.

Sitting a few feet away, I could hear his muffled sobs. Bless his heart. During rehearsal a few minutes earlier, his voice had been remarkably strong and clear. Now, with the whole world watching, his confidence had plummeted.

We’ve all been there. Too scared to sing out, to speak up, to raise our hand, to take a chance, to offer our opinion, to say, “I can do this.”

And imagine being in his mother’s shoes, searching for the right words to say, while two hundred people anxiously waited for the service to continue?

Whatever comfort she offered, it was effective. Moments later, her young son reappeared, wiping his cheeks dry with one hand and gripping the microphone with the other.

The congregation applauded. Even before they heard him sing, they honored his willingness to try.

When the boy took his place front and center, I realized what his mother must have promised him: “I’ll sing with you.” Kneeling close beside him, she wrapped her arm around his waist, leaned toward the microphone, and matched her pitch with his.

With each note, he stood a little taller. Sang a little louder. When the choir joined in, his mother eased back so he could do all the arm movements to the song. But she never left his side, never stopped smiling through her tears.

This is what God does for us, beloved. He sings when we can’t sing. He does what we can’t do. He gives us strength. He remains by our side.

“For the Lord your God goes with you; He will never leave you nor forsake you.” {Deuteronomy 31:6}

Our brave boy made it through a second short solo and all the way to the final note, before collapsing in his mother’s arms.

More applause followed for the little singer that could. Life isn’t just about talent. It’s also about tenacity. Far more, it’s about the power of love.

Now it was my turn to be nervous. I clutched the black notebook that contained my morning message. How could I possibly speak after such a moving experience, one we’d all shared and had barely recovered from?

My husband tipped his head toward mine and whispered, “I hope you’re talking about grace.”

I looked down at my notes. The verse God had prompted me to choose weeks before now marched across the page in bold 20-point type:

“My grace is sufficient for you, for my power is made perfect in weakness.” {2 Corinthians 12:9}

God knew what would be needed. He always does. He always will. Oh, the things He can accomplish, not in spite of our weaknesses, but because of them.

I moved to the platform and stood in the same spot where a fair-haired boy had faced his fears with love by his side. His mother had left. But Love was still there.

Later, when we spilled through the church doors, we discovered the children had run ahead of us, stubs of chalk in their hands. Rather than drawing stick figures, someone had written a mighty truth across the paving squares.

You are loved, friend. He is with you. In your weakness, He is strong.

Life isn’t just about talent. It’s also about tenacity. Far more, it’s about the power of love. {Tweet This!} 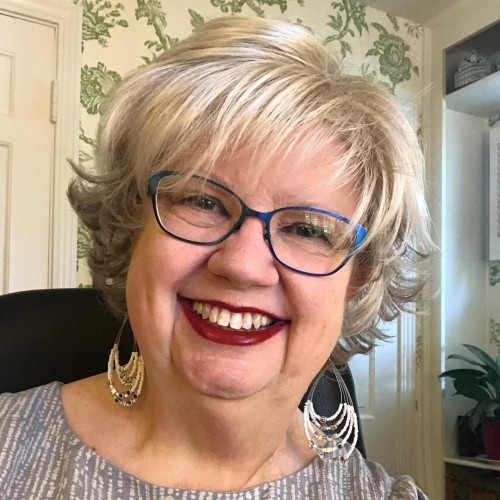 Former Bad Girl, grateful for the grace God offers. Happy wife of Bill, one of the Good Guys. Proud mom of two grown-up kids with tender hearts. Lame housekeeper. Marginal cook. Pitiful gardener. Stuff I love? Encouraging my sisters in Christ—across the page, from the platform, online, in person. Unpacking...