The summer after I graduated from law school, I had a lot on my plate. I was studying for the bar exam, finalizing plans for my wedding, living by myself in a new city, and adjusting to life states away from my closest friends.

It wasn’t a bad time, but I was juggling a lot of changes. Suddenly and inexplicably, a fog of depression settled over me. It made it hard for me to function at a time when I needed to get a lot of things done. All I wanted to do was sleep.

I fought the bone-numbing lethargy like a champ by studying on the treadmill, sitting outside with my test prep books in the blistering heat, and trudging to one coffee shop after another, but it was an uphill battle. And the bar exam was getting closer every day.

A week later my husband-to-be came to visit. Neither of us had any money, so we resorted to one of our favorite student pastimes: visiting dog shelters for some puppy therapy.

The first shelter we visited was hot, noisy, and had only big dogs. One of the volunteers saw the look on my face and referred us to a small dog shelter in Atlanta. We hopped in the car and went, planning only on petting some lonely puppies.

You know what happened, don’t you? Obviously, I came home with a dog! Not the purebred Cavalier King Charles puppy I had imagined, but a sweet, one-year-old mixed breed who seemed just as desperate to get out of the dog shelter as I was not to be alone in my apartment. Armed with instructions to walk her “three times a day” and the promise that “she won’t shed a bit,” we loaded her back into my high school car and drove her to her new home.

The following Monday when it was time to get up and study again, I didn’t have a choice. Eppie was scratching and howling to get out of her crate. Hours later when I came home from my test prep class and wanted to rest “for just a minute,” she jumped on me to take her for a walk. That evening when I started to doze off over my flash cards, she ran circles like a mad dog around the apartment. When it was time for me to finally go to bed for the night, she started nosing me off the couch and towards the bedroom.

God didn’t just give me a reason to get up and snap out of it, He gave me a 23-pound, 24-hour accountability partner!

Eight years later, that accountability pup has mellowed into a sweet couch lounger who lets my two babies hug her, pull her tail, and give her open mouthed kisses. She comforts my son during thunderstorms and “sings” with us when we say the blessing. She is a friend and family member. She is a gift. She is love.

Now when I pray for something audacious and bold, I think of Eppie. I would have settled for an alarm clock, but God answered my request with a response to prayers not even known at the time. She is evidence for me that God goes before me, behind me, and with me — even when I don’t fully recognize his presence.

Isn’t He the best?

“Declare his glory among the nations, his marvelous deeds among all peoples.” Psalm 96:3

I’d love to hear your story of how God met you in doubt and answered your prayers unexpectedly. 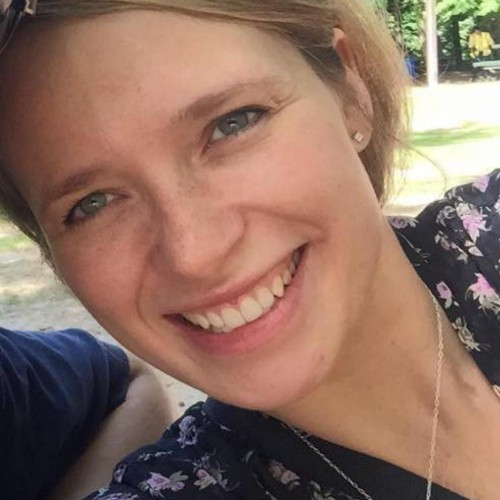 I am a wife, mom of two pre-schoolers, college faculty member and closet-writer of musicals, children's stories, and poetry. I love to dance, create things, and nurture babies, plants, talent in others, and, well, pretty much everything! I grew up on a farm in small town south Georgia where I...