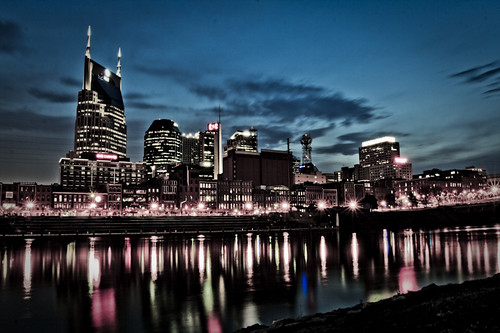 My friend Matt asked, on twitter, for his fans to list their favorite song of his. As a singer/songwriter with a deep well of albums, the replies began to fly in.

As a fan and a friend, my mind immediately swirled back to a few years ago, when I was deciding about moving to Nashville, and I thought of the last song from his 2006 album.

That song entered my life in a season that felt very unsafe and unknown. I was leaving my hometown alone, heading to a place I did not know full of people I did not know, and I didn’t want to do it. But I knew it was the right thing, the God thing, even if it meant going alone.

No matter where I turned, God sang His reassurances to me. It wasn’t always on Christian radio, in fact- it rarely was. It was at obscure concerts in downtown Atlanta and quiet crooning from indie albums. It was radio commercials and worship songs and love songs and CDs that friends handed me on a whim. God was everywhere I didn’t expect to hear Him.

Matt’s song, Capitol City, is the one that has long been my favorite and was, to be dramatic and over-emotional, the song that felt like a life-preserver when the waves of doubt and worry and loneliness felt like I would drown.

I heard God in it.

“As you go your own way…. remember do not be afraid…

cause you’re right where you should be…. in Capitol City.”

I cried when I played it, and I played it a lot those last few weeks in Atlanta and those first few months in Nashville. I heard God say that He was right with me, that He would show His nearness whenever I needed Him to, that I did not need to be afraid.

If anything has been proven true in the last five years, it is this. Nashville is right where I should be. But I shouldn’t be surprised – God told me that a long time ago.

Music does that. Lyrics have that kind of power, don’t they? No matter what they are written for or who it is about, when God wants to get a message across, He does it. And it can rescue us, heal us, carry us.

What songs has God unexpectedly used to speak to you?