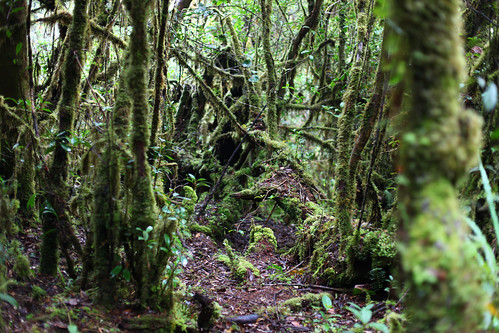 I saw a picture in my head one time as a friend told me a story of his trip through the jungle. He could see the path at his feet before him, but if he looked straight ahead, the brush was so thick that he couldn’t see anything but the vines and leaves tangled at eye-level.

He was leading a team, and so it was up to him to use his machete [don’t you know he LOVED telling me this part of the story] to chop at the overgrowth to make a way for his people to head down the path. He got scraped up a good bit, but, as he tells it, that was just a minor setback in the bigger story where he was the hero- yes, he called himself a hero – the story that there was a way to walk and it was up to him to make sure those behind him had clear access to travel.

I sat across the table in a coffee shop here in Nashville as a younger single girl told me of her aches and pains and the faith issues that, in her mind, were directly related to her singleness. [I. Hear. Ya. Sister.] She didn’t cry, but I held a napkin in my grip because I thought for sure, at any moment, she would. She told me stories, many that I felt she was pulling from my own journal as a 20-something single Christian gal, and I told her what I never knew to tell myself.

But God has not forgotten you.

He is showing you His love for you, even now.

She asked me why I started writing about singleness this year. What was it about my 31st year, she wondered, that made me finally want to talk about it.

“God.” I said, “He just made it clear that this was the right time.”

Without hesitation, she said, “I’m so glad. We all need trailblazers. Now that I see that you have done this, I genuinely think I can do it too.”

I almost laughed. Trailblazer? Sister, if this is trailblazing, I am the most cut up, ill equipped, whiny leader a team has ever encountered.

I frustratingly hack away at the brush that cuts me on this path of singleness, the thorns of lies that try to penetrate my skin, the leaves of worry and the vines of loneliness that weave so tight before my eyes that the only way I can even know there is a way forward is by the path at my feet. [And even that isn’t so comforting because I don’t know where it leads.]

“Thy Word is a lamp unto my feet and a light unto my path….” I sing in my head as the tears pour and I push forward on this trail.

I’ve never noticed the innocent young faces lined up behind me, watching the clearing process, and then walking through the openings that my toiling has created.

I never knew this was for them.

If that is the case, then every day I have wrestled with my singleness and the God who knows and loves me through it was so that others behind me would see and then know an easier path?

Then every day has been worth it.

You, my friend, married or single, you are blazing a trail with your life for the younger women behind you. They will have their own overgrowth to challenge them, and they will lead the way for others. But for today, would you be intentional about cutting back as much brush as you can?

Because you are making a way for them, saving them some pain that your bloodied arms prove is real, and honoring their footsteps by providing a clear path.

Never forget that as you are stepping forward with your life, you are a trailblazer.

May they learn to blaze with integrity, honesty, faith, and heart.